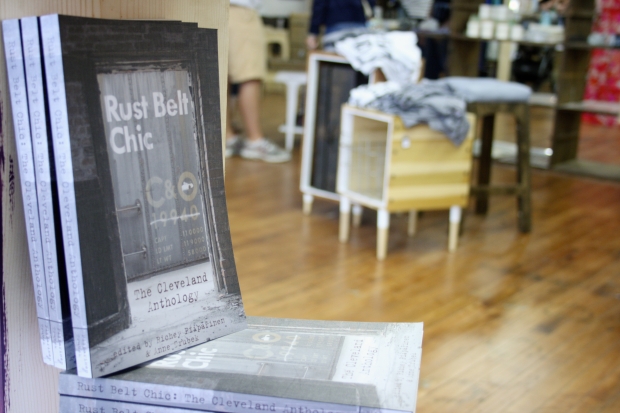 Whether I’m purchasing goods or services for myself or finding that special gift for dear friend I do my best to support local establishments.  A few of my favorite shops and boutiques around Cleveland include Room Service, Something Different Gallery and Pinky’s Daily Planner.  There’s something magical about the connection I’ve made with each shop owner, their passion and positive energy is nothing short of contagious.  It should come as no surprise that when I learned about a local group lobbying for their cause on Kickstarter they immediately had my attention.

I was first introduced to this creative funding effort via a tweet from a good friend of mine.  I followed the link and began to read-up on “Belt: Cleveland’s new online magazine”.  It all started with the publishing of the book “Rust Belt Chic“; when after co-editing the book with Richey Piiparinen, Anne Trubek launched the Kickstarter campaign to fund the creation of ‘an on-line magazine for Cleveland and around the rust belt’.  Not only did they raise the funds requested, but they knocked it out of the park!

I’m excited to be attending the launch celebration of BELT in a little over a week!  I’m equally excited to have had the opportunity to become a Lifetime Member; act fast as there are only 250 of these coveted spots and, for goodness sake, they’re only $30!

If you find yourself in the “216” on Friday, August 23rd, get on it already and buy a ticket to the celebration!  Following is an excerpt from their Kickstarter page regarding the event.

“Our party will be held on August 23 at St. John’s Parish Hall in Ohio City. The former church has not been open to the public for years, but it is being rehabbed this summer and will be ready to launch, as will we, in August. It contains a great bit of musical history, too: Bone Thugs n Harmony recorded a few records there.”

Here’s to coming together as a community and celebrating our collective support and success; Cheers!